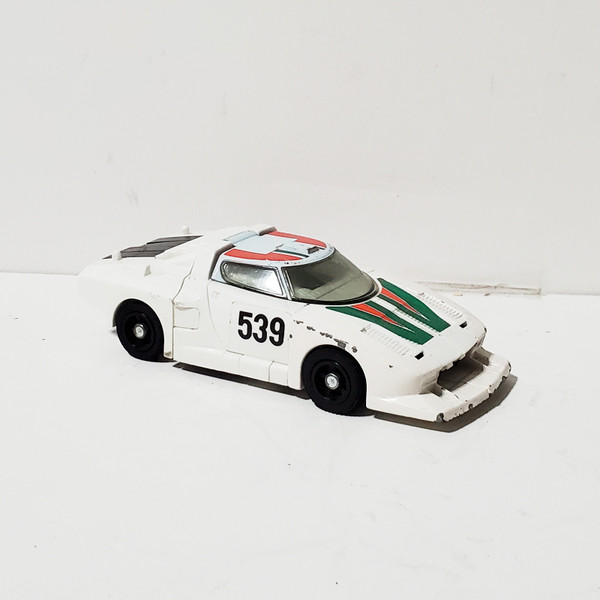 This is a vintage Transformers G1 Autobot Wheeljack action figure, made by Takara in 1984 and distributed in NA by Hasbro. Wheeljack transforms into the #539 Lancia Stratos Turbo, a Group 5 endurance racing car driven by Sandro Munari and Piero Sodano in the 1977 Giro d’Italia. Wheeljack, like all the Autobot Cars until 1986, was originally released in Takara’s Diaclone as "Car Robot Lancia Stratos Turbo". This is the initial release of Wheeljack, which is distinguished by the type of pin used to attach his wheels: an indented hexagonal head, which more accurately recreates the real car’s single wheel lug. This early verison also features larger spoiler tabs and holes (meaning spoilers are not compatible between variants). He has never been reissued, as his molds are reported as destroyed. This would make a GREAT addition to anyone's Transformers or 80's Toys collection!

CONDITION: This loose figure is in good condition. As is common with Wheeljack, HIS REAR SPOILERS ARE MISSING. The joints are still nice and tight. There is some minor paint loss on the front-right fender and bottom of the front spoiler. The close-up photos make it look much worse than it is. All accessories are missing. Displays well. Actual pictures shown, please view the photos and judge for yourself. Sold AS-IS.

LI Toy & Game is a small family-run business on long island, with a physical retail store & strong online presence. We have an excellent reputation because we sell good stuff, describe it accurately, and take care of our customers! We are closed on Mondays, and ship Tuesday - Saturday, and also offer local pickup at our store.

Wizards of the Coast