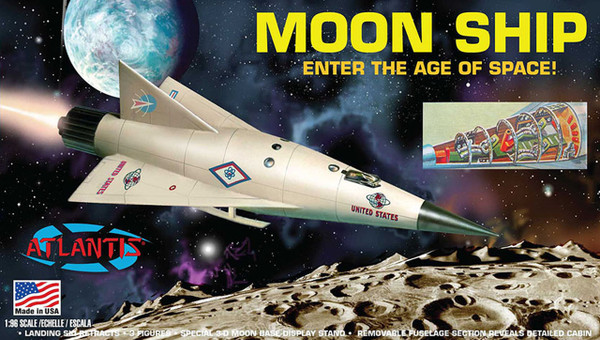 In 1956, Revell released the XSL-01 rocket kit. Today, Atlantis Models has released the lunar lander, known as the Moon Ship, as a standalone kit. This kit is molded in silver and clear. Expanded decal sheet for both US and England versions. Measures 6.25 Inches Long and 3.25 inches wide. 29 Parts. Detailed interior with Moon display base. New updated box. Skill level 2. Requires Glue for assembly. MADE IN USA!!

Designed back in 1959 as a laboratory and living quarters for its three man crew, the Moon Ship was the type of vehicle which they imagined would be used on the first lunar exploration expeditions. Once free of its giant booster rockets, the Moon Ship would be propelled in space by its own nuclear power plant. Approximately five days after blast-off, it would make its landing in one of the giant Moon craters, probably Plato. Once the landing was made, the crew, clad in special space suits, would spend two days making scientific observations on the lunar surface. When their work was completed, they would blast off from the Moon for the return trip to Earth. The crew would consist of a Pilot, Navigator, and a Flight Engineer. Each of these men would also be accomplished scientists capable of making every minute on the Moon count.

LI Toy & Game is a small family-run business on long island, with a physical retail store & strong online presence. We have an excellent reputation because we sell good stuff, describe it accurately, and take care of our customers! We are closed on Mondays, and ship Tuesday - Saturday, and also offer local pickup at our store.