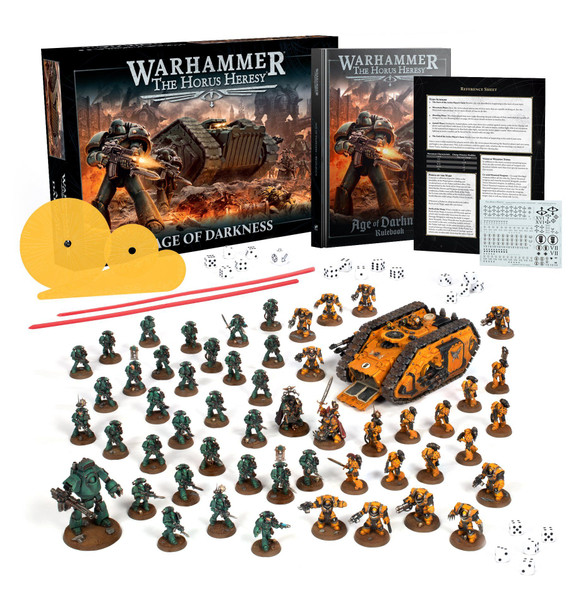 This big box set dwarfs all others! It is an absolutely colossal set containing everything you need to start fighting epic battles... This box can be viewed as either a 2-player Starter Set, or as a complete starter army for one player. All of these units can be used with an existing 40K force, or in the new 30K line.

You get a 54 plastic miniatures – that’s 2 Legion Praetors, 10 Cataphractii Terminators, 40 highly customisable Tactical Space Marines in Mk VI power armour, 1 Contemptor Dreadnought, and 1 Spartan Assault Tank. This can be used as two substantial forces, or one incredibly mighty army. Everything but the Terminators are completely new models.

There's also a 336-page hardcover rulebook filled with everything you need to know, including extensive background information on one of the richest science fiction settings in the world, as well as comprehensive rules for this tactically rich tabletop wargame. There’s also a 36-page construction guide for your new models, introductory army lists for all the models you get in the box, and two 4-page rules reference sheets.

But wait, theres more! You also get 20 six-sided dice, 1 six-sided scatter die, 2 blast templates, 1 flame template, 2 classic-style red plastic measuring sticks, and a transfer sheet. If purchased separately, this is a $500 value! These miniatures can either be used in the new 30K gaming line or the classic 40K gaming line!

The miniatures in this box are shown as Imperial Fists & Sons of Horus. However, they are generic models with no faction-specific sculpting, so you can paint them as whatever legions you like.

The Horus Heresy is THE pivotal event within the Warhammer universe. Set 10,000 years before Warhammer 40,000 (hence 30k). The Horus Heresy campaign follows the death of Horus Lupercal and his battle which crippled the Emperor of Mankind. The game follows campaigns in the war between 18 of the original 20 first founding Space Marine legions. The 2nd and 11th legions were expunged from existence before the onset of the Horus Heresy. 9 legions are loyal to the emperor, and 9 legions are following the Warmaster Horus. So the game is all Space Marine -vs- Space Marine.

We are an authorized retailer of Games Workshop and purchase directly from them.

LI Toy & Game is a family-run toy shop on long island, with a physical retail store & strong online presence. We have an excellent reputation because we sell good stuff, describe it accurately, and take care of our customers! We are closed on Mondays, ship Tuesday - Saturday, and offer local pickup at our store in Kings Park.